In 2012 we formalised our support for former prisoners on release by developing the Sounding Out programme. To date four bands have emerged from the programme and the participants have achieved some amazing things. Here’s the story so far!

The first Sounding Out band: Platform 7

Platform 7 formed in 2012 – that first year they performed at the launch of the Koestler Arts exhibition at the Royal Festival Hall, at St Marylebone Church and in the Queen Elizabeth Hall. Members of the band took on Support Musician roles on Making Tracks projects, as have musicians from all the subsequent cohorts of Sounding Out. In 2014 the band reconvened for a performance at Bush Hall, which included a collaboration with bluegrass band Police Dog Hogan, leading to them being invited to guest of the track ‘Home’ when PDH recorded their album. In 2016 Platform 7 were a big part of our 21st Year Celebrations, contributing to the new Bridges piece/film and performing at the Union Chapel.

Artistic Director Sara says: “Soulful voices combined with funk and r&b driven grooves gave Platform 7 a unique sound. Having 4 strong vocalists meant we could experiment with elaborate harmonies and being such great musicians, the singers were able to work out some impressive backing vocals to support the soloists. They were the band that loved a burning solo, so often expertly executed by the band’s guitarist, Gary.”

Very sadly, Gary passed away earlier this year. Watch our tribute to him below: 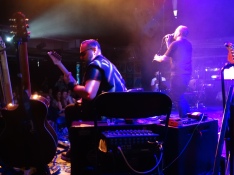 Inside Out arrived with a bang! They were the first band to form while some members were still serving sentences, leading to their debut collection being titled ‘Out on License’. After a warm-up gig at the Betsy Trotwood, they showcased their unique sound at Bush Hall in a barnstorming gig in January 2018. In summer 2018 they were part of a special collaboration with Music Jelly, which included filming an interactive video for their track ‘Human’ and filming loops of the interactive audio-visual mash-ups (they’re great fun to play around with! Experiment here). They returned to the stage to support next-generation Multiplay at their showcase gig in July 2019.

Sara says: “Famous for their rock infused, driving beats and one word titles. The band comprised some great songwriters and musicians and had a focussed and unique sound. Laurence, their front man was a true performer and the master of the one liner.” 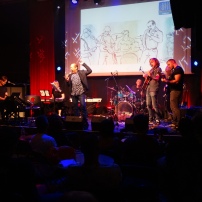 Multiplay headlined a Sounding Out showcase at Rich Mix in July 2019. Supported by Sounding Out veterans Platform 7 and Inside Out, Multiplay rose to the challenge of closing the show in fine style, to a roar of approval from the audience. Multiplay were also part of a special showcase for the arts in criminal justice at Snape Maltings and a collaboration with students from Guildhall School of Music & Drama.

Sara says: “The experts at writing pop tunes which everyone wanted to dance to. John, the band’s main singer was a true front man, engaging audiences with ease. Supported by a strong sound, Multiplay gained many fans at their gigs.” 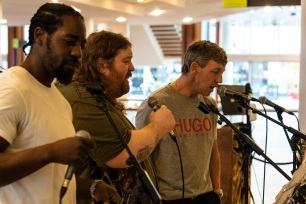 The Pinnacle debuted their first set of material at a showcase as part of the ‘Koestler Curates’ series at Royal Festival hall in autumn 2019. Members of the band were interviewed for the Changing Lives podcast. In early 2020, members of the band took part in the London phase of the Lullaby Project, writing songs for their children and grandchildren. During lockdown we have continued to work with the band via online sessions.

Sara says: “An eclectic and brilliant mix of singer songwriters and rappers, all of whom combined to create the most fantastic sound.”

Sounding Out during lockdown

During lockdown we’ve found new ways to work with our Sounding Out musicians online. In the summer we ran a series of introductory workshops including sessions on spoken word, lyric writing, DJing and podcasting.

“The best thing was the fact that every day a new and different subject was given; it kept the sessions fresh,” Sounding Out participant

“I really enjoyed the fact I learned a lot of things I never knew… mainly the DJ and podcast side of things, both of which I’m now going to look more into now,” Sounding Out participant

Sounding Out musicians played important roles in our 25th birthday celebrations, including speaking on podcasts and webinars, contributing songs for our celebratory album, collaborating with musicians from Chicago to create music honoring the Black Lives Matter movement, and performing at our 25th Birthday Show.

More recently we’ve been working with groups online to make new music. Later in 2021 we hope to resume in person delivery of the programme so we can run our Training project with a new group, providing facilitation skills for them to take roles a Support Musicians on future projects with young people.

As part of a project supported by Arts Council England, for our 25th anniversary celebrations our project team musicians have reinterpreted some classic Sounding Out songs in their own styles, some with accompanying videos!